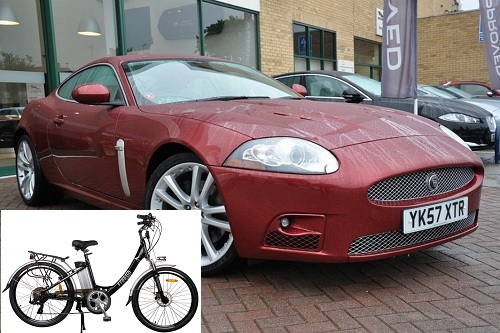 Commuting is a serious business – seriously expensive and seriously time consuming! Cars have ruled the roads for a century, but could that all be about to change?

The new breed of lithium powered electric bikes are fast, light, strong and efficient. But could they replace cars and buses as the commuter vehicle of choice in the modern age? We are about to find out…

Thursday 12 September 2013 is National Cycle to Work day across the UK and thousands of people will be taking up the challenge and trying two wheels to get to work. But for many the thought of using a good old ‘push bike’ does not appeal. They are discouraged by factors such as long distance, steep hills, or simply because they don’t want to arrive at work sweaty.

Electric bikes could be the solution. Many electric bikes now fall inside the government’s ‘Cycle to Work Scheme’ maximum of £1000, where an employee can buy a bicycle through their employer, receive full tax relief (saving 32% to 42%) on the price, and pay the cost in installments out of their wages over a year. But can an ‘ebike’ keep up with a car on the daily commute in terms of time and price?

There is only one way to find out…

The Challenge:
Enderby is at the outer edge of Leicester’s commuter belt, approximately 6 miles South of Leicester city centre. It is further than what most people would consider to be ‘cycling distance’ for work. Starting from ‘The Foxhunter’ roundabout in Enderby (LE19 2BJ) the challenge is to see who can get to the ‘Ebike Centres’ shop on Granby Street in Leicester city centre (LE1 1DL) first.

The contestants:
Our three commuters are using three forms of transport; a public bus, a £999 electric bike and a Jaguar XK 4.2 litre V8 supercharged convertible (and it’s red!).

Will this be an epic ‘David and Goliath’ battle against overwhelming odds, or will the Supercar retain its place as the ‘King of the Commute’?

Fairness:
This is not a foregone conclusion. The Supercar has several miles of dual carriageway to give it a head start. The bus has significant stretches of bus lane to make up the distance closer to town. The ebike can use bus lanes and cycle paths. So place your bets!!!