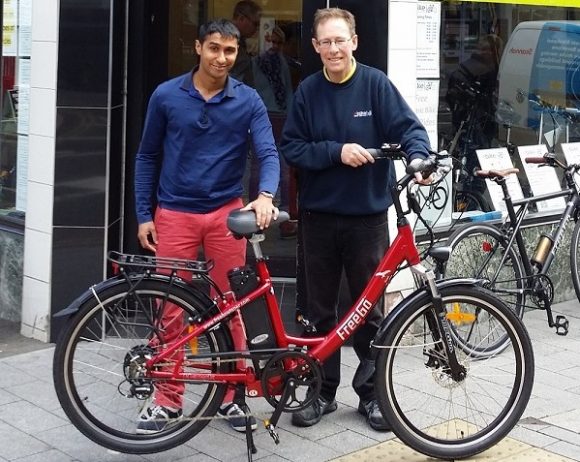 Following on from our recent post about the winner of a £1000 FreeGo Hawk at Sky Ride, the lucky (and very happy) winner came in to Ebike Centres on Saturday to collect his electric bike.

Kierton, who had traveled down from Preston to Leicester for Sky Ride, had never rode an electric bike before he tried one out with Ebike Centres. By the time we phoned him, after the Mayor drew his winning entry at the end of Sky Ride, he was already on his way home. He described his reaction as ‘disbelief’ when we told him, and texted back a couple of times to make sure it was not a mistake!

His chosen prize, a red step-though FreeGo Hawk, is one of our best selling bikes with excellent electric bike reviews on our website.

After we took him out on a full test ride from our shop on Granby Street we asked Kierton what he thought the benefits might be.  “I think one of the biggest benefits of an electric bike is the higher average speed you can achieve in daily commutes to work. Cycle networks tend to be be far less congested and therefore the bike can make good progress on journeys. The other main benefit is the cost per mile, it is a lot lower than running a traditional car.”

He added “I definitely think more people should try electric bikes. The electric bike has all the features of a normal road bike but has the added benefit of the electric motor to assist with range and steep gradients. I think the electric bike can appeal to people who are looking for something extra from their bike”.

As he left with his new FreeGo Hawk we asked him what he would mainly use his ebike for. “Mostly I will be using my bike for leisure however on the odd occasion I will take it to work.”

Congratulation to Kierton, and thanks to everyone who took part. If you missed out this time, why not have a go again next year?